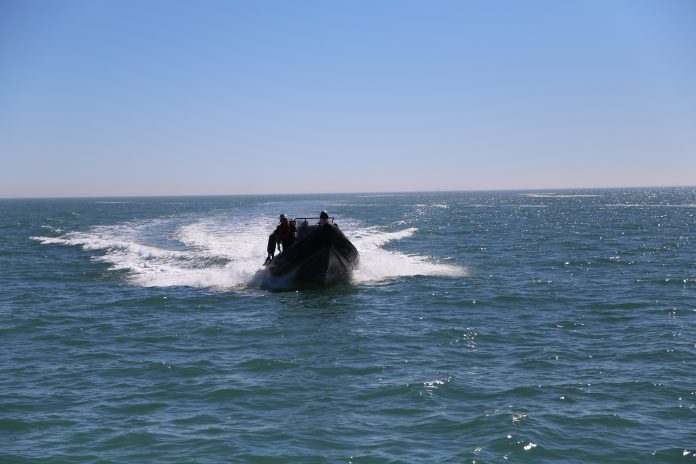 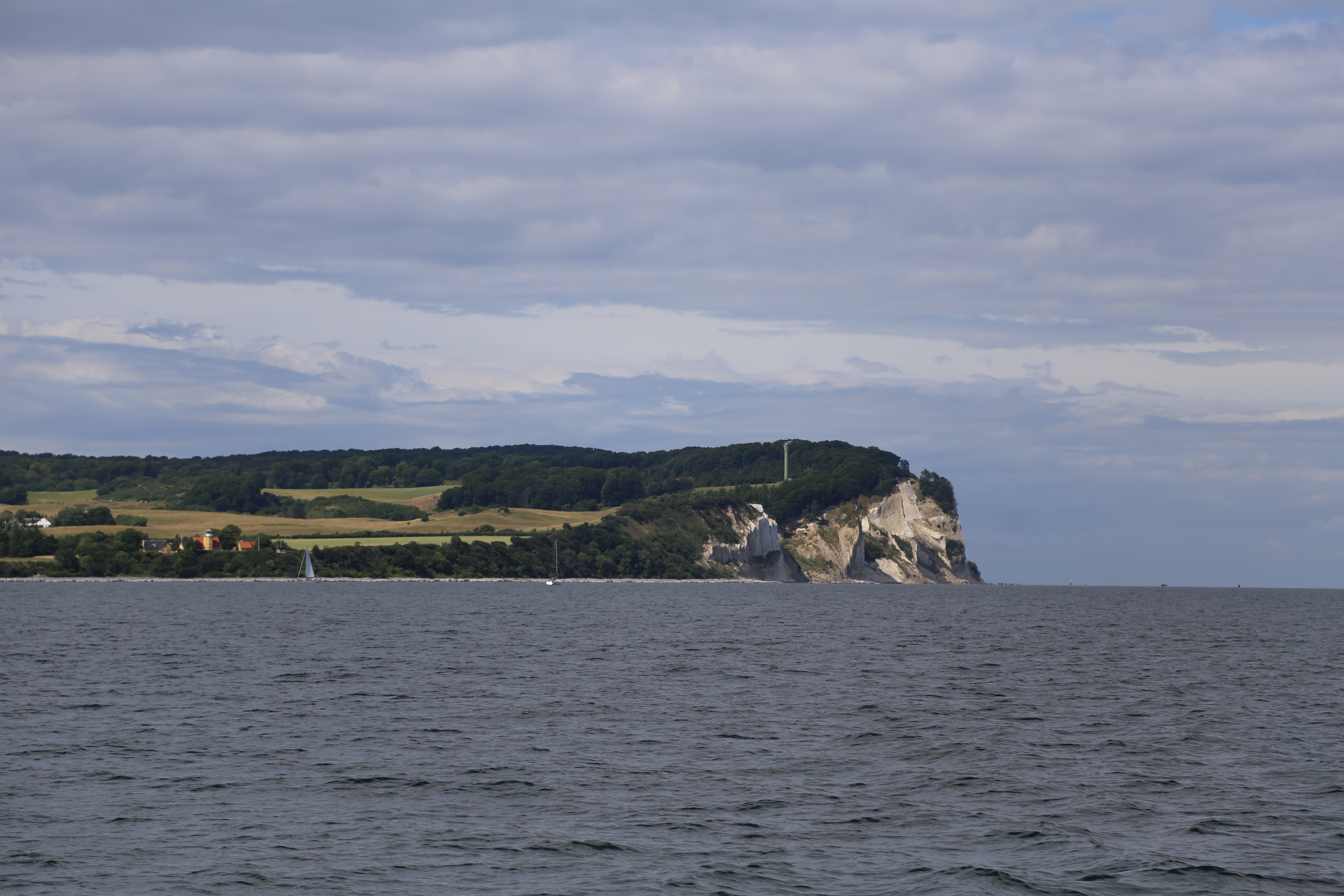 24.6 Departure from Rungsted to Amaliehaven, København

A truely wonderful day where Marie and I were running around trying to be ready to leave – for Copenhagen. No not far, but our backup for picking up stuff we had forgotten and our goodby to OUR girls Alexandra and Michaela.

Thanks very much to the many people who came to say goodby although we did have a great farewell parties two weeks before – thanks to you all, it was very nice to be seen off.

1515 we went to the diesel tank and filled our two 450 liter tanks to the top – a good day for the kiosk… Erik gave us last minutes help with an oil basket, and then suddenly of we went – and the girls were kind enough to sail with us into Copenhagen. 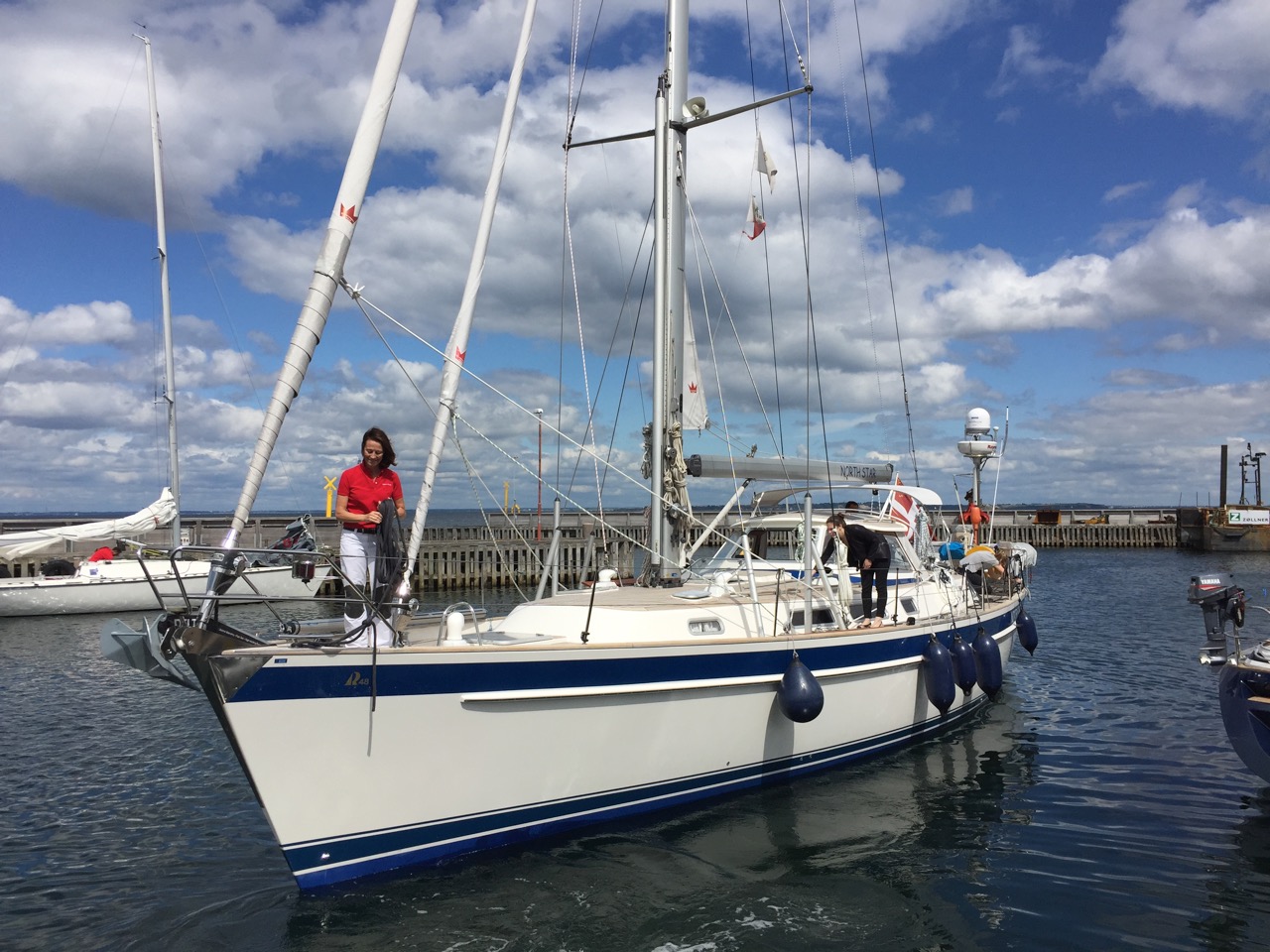 The day after we celebrated Alexandras graduation and we were and are very proud. Sunday was more goodbyes and Monday I had a board meeting and then suddenly –  it was time.

0700 we departed and Michaela was at the pier to say goodby. It was so sweet and nice, but I will never forget how alone she was looking as she was standing on the pier disappearing in the horisont. It was great to get under way, but somehow kids leave their parents and not the other way around. Fortunately she came to spend a month aboard North Star only six weeks later and we have been returning on a regular basis. 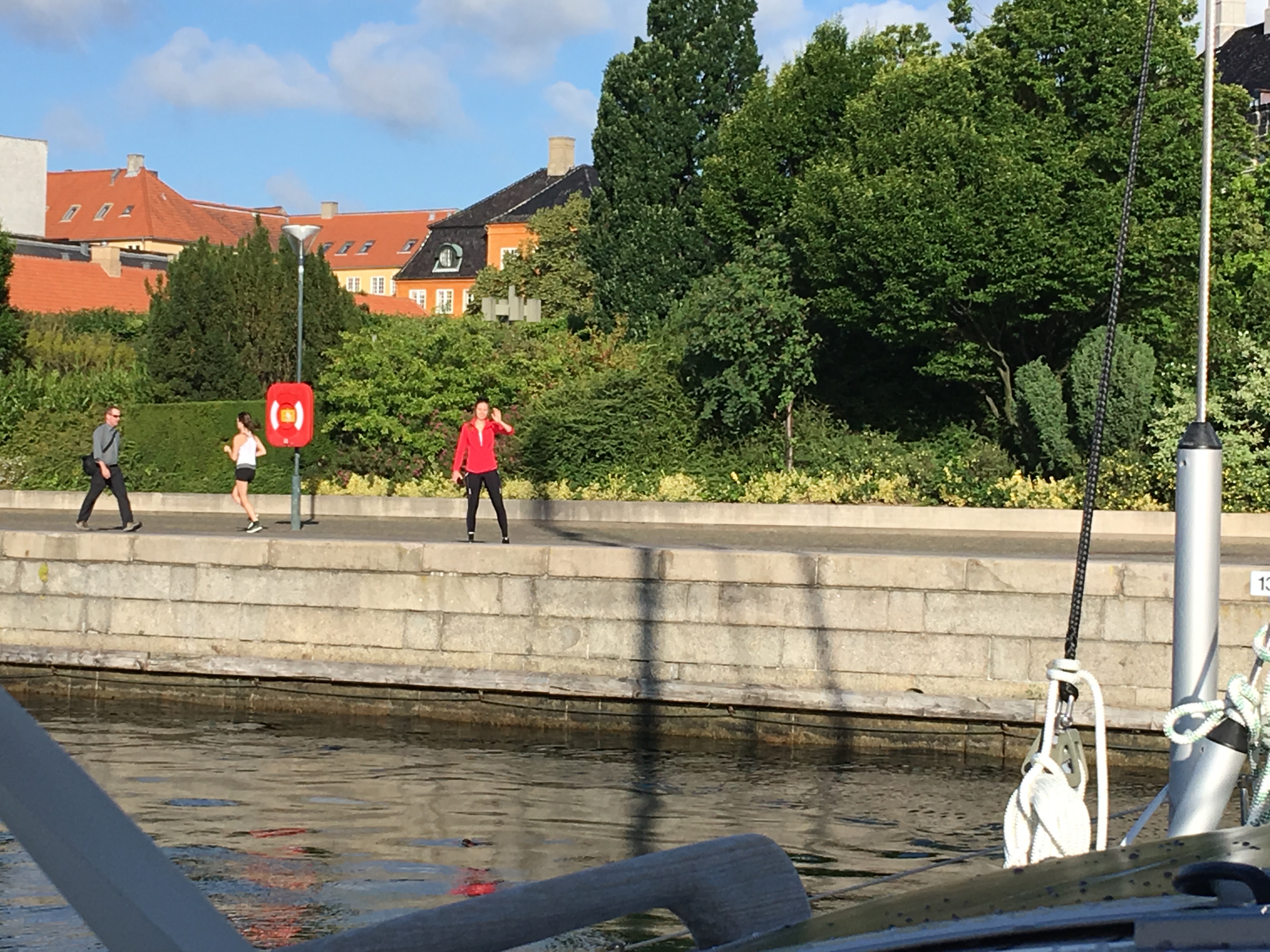 Finally arrival to Gedser after a day with the wind on the nose and a day where the day goal was 120 nautical miles – so
we used the engine a lot. When the last light disappeared we sneaked into the narrow channel and moored outside a german sailor.

Departure 0600 passing by the ingoing ferrie and a course towards Kiel, with a bit of tacking in the short and step waves you often find in the Baltic. Be careful of the many bouyes which can be confusing and of course the ferries.

It was a rainy and windy day, but a wonderful day for sailing. North Star enjoy finally to use the sails. Marie and I was also fine with the weather, as late June means – soon it will be summer. Unfortunately it did take quit some time this year – but we were on our way south. Late afternoon we arrived through a marvellous view of many sails in the Kieler Bay, into the Kiel Olympic Sports Hafen. It is an easy entry from the east, even though the entry is hard to spot. It is a large  marina where guest boats moor alongside, with all services and a very friendly Harbour master.

We are excited,  finally being on our way, but we have seen it all before. Even the Kieler Canal is handled by Marie with elegancy, up the stairs. Until she realises that this time the crossing is free, as an earlier accident have made them decide to forbid pleasure sailors to climb out of the Locks. Beware to lower your fenders into the water, and then the hight will be just right.

We arrived in the inner marina in Rendsburg early afternoon and had a nice dinner in the Marina – good restaurant and helpful marina staff. Even washing of clothes, was taken care of.

Next morning we were early risers, as Marie had promised to be my tour guide for the day. After the initial shopping, we found the tourist information and the blue trail, which took us around in this old Danish Garnisons town. It was very educational to be reminded about the greatness
of our forefathers attempt, building the Danish Kingdom much bigger than today. But also to get a glimpse of the blindfolded nationalism, which led us into the war of 1849 and the devastating blow in 1864, where we lost all dreams of being a greater power in Europe. Herunder also Rendsburg, which now is very much German. We met a guide in the Garnison Church, who gave us a history lesson I will seldom forget. Not only about the Church, but also about Frederik the 7th and the long military tradition in Rendburg. It is a pleasure to be positively surprised every time you meet new people and have the time available to enjoy.

When we went into Rendsburg, we saw an Amel 54 registered in Guernsey and now on its way to Cuxhaven so we passed them and chatted about future plans. We did have the same route and as often, without a conscious decision you decide to tack along and learn from each other. It turns out that Callisto, skippered by Mike and his wife Ann had been on a tour around the world, which took them seven years. For us ruggies who just started, it was a very deep weld to dig into. So we were very social during our days in Cuxhaven and we hope to meet again, as they are still fulltime cruisers. This time on their way to La Rochelle for a refit. 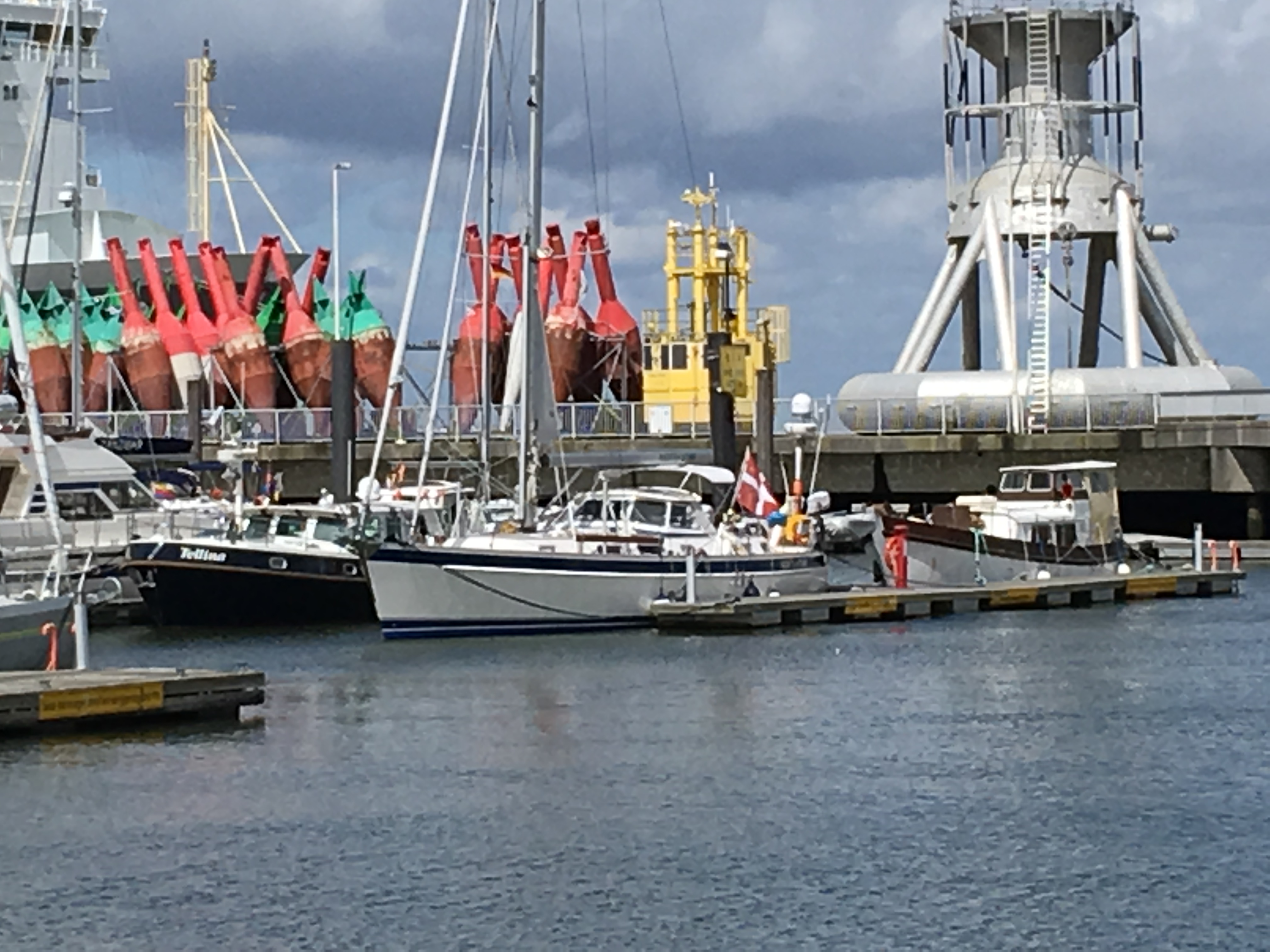 Cuxhaven is a typical German town at the bank of Elben, just trying to get along. They do maintain and ageing fishing fleet and at the same time they are trying to build up a number of attractions for the tourists. It was nice to be their waiting for the weather, but if you pass it, you do not miss much.

The Marina is spacious and well protected, with a restaurant and a helpfull staff. We did not need any services, but I was told it is easy to get help for the preparation to pass the German Bight.

Finally Marie and I was ready to test ourselves and North Star in the notorious troublesome water called the German Bight, which is attracting all lows moving north. It is also a combination of deeper waters meeting the lows of the Friesland islands, giving a sailor confused waves. The days passed with waiting and the analysis of the weather on Passage weather, Pocket Grib and Predict wind in the four different weather models. The conclusion was clear, if we wanted to go south and not wait for another week, we had to leave with the tide at 0400 and so we did, even though the window was a little short and closing. Afterwards I do think that the route going NW to Helgoland and then south to Den Helder is the better choice at least for the wind angle!

We motored out of Elben and then sailed for a few hours, until the wind completely died, fully in line with our forecast. The swell was around two meters, so even motoring was a little uncomfortable. Later in the afternoon we expected wind from west up to 15 knots and building seas, but nothing we could not handle. Unfortunately together with the darkness the wind start to build and went into the twenties right on the nose and as usual when we turned the corner at Vliesland going south west the wind followed. The Goods were not looking too favorable on us, trying to challenge them. So they rewarded us with a sail through the night with with 3-4 meters of waves, 20 degrees to the wind with stormsail supported with the engine for the rest of the night, until we arrived in Den Helder around mid afternoon, six hours later than planned…..very wet and tired. Afterwards it turns out that we were the lucky ones, because Callisto, motoring slightly slower than North Star never made it around the Vliesland corner, as the surprising storm increased in force. They were forced to go into shelter, behind Vliesland in the dark and at low water – not a pleasant experience. We never met again as we left Den Helder and they took the North Sea route to Guernsey.

The German Bight was a great lesson for Marie and I, building our confidence in North Star and ourselves. We were tired, but never in trouble and North Star took it all in strides, except being submarine for that long exposed every leak in the boat and replacement of all skylights, was put o 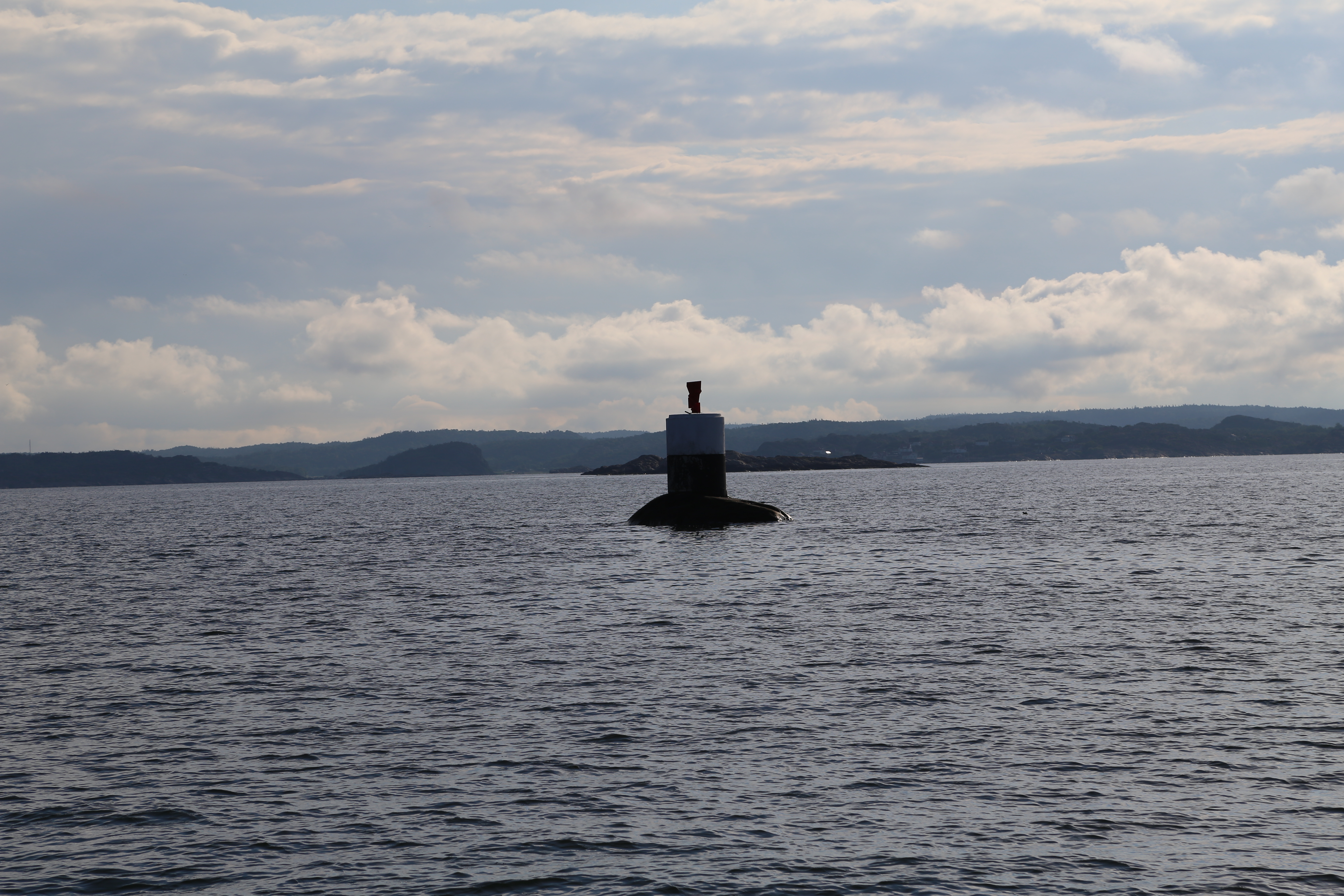 n the to do list.
I have to rapport although, that it is important that skipper sleeps plentiful, because as we entered Den Helder, which is a very important Dutch Marine harbour with lots of warship, skipper was navigating after a very speciel moving buoy, which turned to be the tower of a sub marine – something co-skipper Marie remembered for a long time.