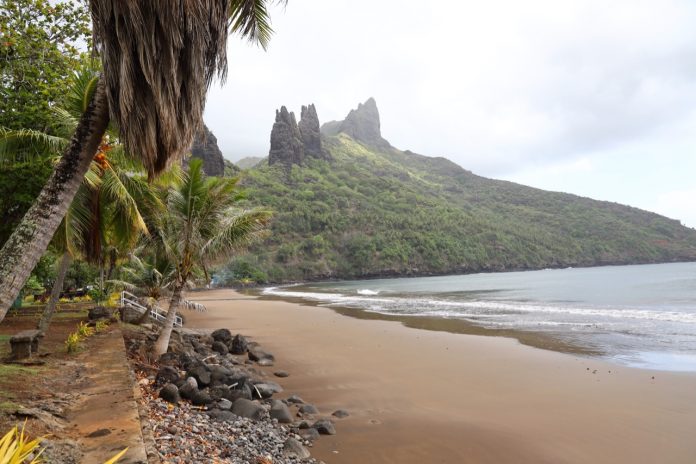 The last travel journal, “Arriving and Leaving Galapagos” described our journey into the great Pacific Ocean and the sail from Panama to Galapagos. And as said, it has changed our worldview and it has matured us as sailors. We always thought that the big divider on our journey was, if we crossed the Panama Canal or not. That was true, as everything changed on the other side. Until then you could really sail from one harbour to the next. On the Pacific side, you sail from one anchorage to the next, and distances become really far and lonely – and you have to be self-reliant in a very different way.

But leaving the Galapagos Islands, looking out over the foredeck of North Star seeing 3000 nm of water with absolutely nothing to hold on to before arriving to the majestic Marquesas. That is probably the biggest challenge Marie and I will ever face, in our sailing career. I have in the small journals during our crossing reported how we felt, so I will not repeat it here.

After sailing for 18 days, we slowly saw the powerful heights of Fatu Hiva rise out of the ocean, towering up to 890 meters. It was green, lush and high on the South West coast and dry on the North coast. But more than anything, it was hard and you could hold on to it. It was dry land. You are immensely proud that the team and the boat managed to cross. There will always be challenges to overcome, problems with systems, weather, sails or crew, and unforeseeable events, though we all try to be prepared.

It is a truly unique experience to end a long sea journey because you are concluding something you really want to continue and you also want to get ashore to rest and enjoy your first cold beer!

We sailed around the northerly point of Fatu Hiva, in search of the Bay of Virgins, which is mentioned in many guidebooks as one of the most beautiful bays in the world. And yes, it is very beautiful and special. When we turned into the bay, it started to rain, it started to pour down so hard, that we stopped and let the boat float for about half an hour – visibility was zero. We had seen three boats on anchor in the bay, and suddenly they were gone. Actually the drop in visibility went so fast, that one boat on the way in hit a boat on anchor. But we are in the tropics, 9 degrees South of the equator, so rain comes and goes very fast. On our way in, it cleared and the sun came out and hit the Virgins – the pillars in the bay. The story goes that it was really named the Bay of Falloses, which is more appropriate. But the French missionaries, which came here, forbid the name and renamed it.

French Polynesia is French, and was colonised by the French. It is very obvious, when you are here and it is nice to be able to find a small part of Europe, so far away. But the cost of the colonisation to the local Polynesian people has been tremendous, ever since Captain Cook first arrived to Tahiti. Fortunately, after many years where the French rulers forbid every traditional customs, including tattooing, language and dancing, the area has regained somewhat autonomy and the old customs are coming back, as the people here are very proud of their heritage and history, as they should be. Still today, all education is in French and only 1-2 hours a week are dedicated to the local language.

We have been lucky to experience some of the almost deserted islands. The Polynesians  have fantastic customs and we know they were some of the greatest sailors, the world has known. Among other skills, they could navigate after the ocean’s temperature.

By now we have travelled long and through many areas, which were “discovered” by one or the other European country. We have experienced first hand, how much damage “we” have done to the local people in our misguided attempt to try to convert them to our beliefs. We have stolen any kind of wealth and brought it back to Europe under the headline that they were colonies and therefore it was our right. In some of these islands, the history taught in the schools and told to the tourists only starts, when some European explorer arrived and changed the local name to the one he decided. We make it seem as if there were nothing before we arrived.

Anyway, we arrived to Fatu Hiva in the Marquesas, our first South Pacific Island and enjoyed every minute. We had the first beer in 19 days and then we rested a bit. Soon after our Norwegian friends from Mamosa came over and invited us to a Polynesian feast in the village. They also brought scones and the local grapefruit Pommelmuse (Pomelo), a giant grapefruit. Nice to have friends preparing for your arrival.

Cruisers around the world are seldom lonely. We were expecting a more quiet social life when we left home, but no. It all starts with exchange of information of any kind. We are dependent on each other in many ways. Cruisers often choose to start being friendly with people with a similar boat, people from the similar countries of origin or other common variables. Weather, boats, provisioning and anchorages are on the priority list as conversation topics. Then after a while, it either turns into a friendship or that is it. But I have no doubt that the term “sun downers” originated among cruisers. It is a very popular pasttime activity and often continues past sun down.

We shopped in the little (read: very little) super market and found a remarkable selection. We bought Fois Gras, engine oil and Magnum ice cream. Yes, who would have thought.

Our friends, whom we had met in Shelter Bay, Panama were waiting and Greyhound was just in front of us. Surrounded by friends, we had arrived.

The night’s feast was amazing. We were invited into a local home and were sitting outside all night eating the most exotic, local dishes from Polynesia. The host had invited a couple of friends over and they played many forms of guitars – large and small. We were a whole table of cruisers and locals eating, drinking and singing together through the night.

Imagine, further away than we had ever been on an island with less than 200 inhabitants, under the stars. The more we reflect, the more lucky and blessed we feel.

After some hiking and exploring on the island, we sailed to Hiva Ova for a bit of civilisation. There is a restaurant, a museum, three supermarkets and plenty of food and diesel. We saw Gaugin and Jacques Brel in the local grave yard as they chose to spend there last years here. It was a nice fast upwind sail and we anchored in the Tahauku bay with a stern anchor. There are many boats and in order for everybody to fit, the custom is to use the stern anchor and when the swells come in, it keeps the bow into the swells and we sleep better. The boat does not roll sideways.

We rented a car and toured the island and saw some of the Polynesian religious remains, among others the smiling Tiki. We also enjoyed the lush green mountains and valleys, the deep fjords, which we also visited by boat, as we drove our 4WD on tracks.

Hiva Ova was a beautiful place and we left very content with our tanks and food storage refilled on a small transfer over to Tahuata and the Bay of Hanamoenoa, which were some deep, quiet and beautiful bays and very comfortable after days on end in rolling waves. We also visited the next bay over, namely The Bay of Dolphins. Here we experienced the local culture in the small village, manta rays, hiking to a water fall, the arrival of the supply ship and just so much trading to get fresh fruit.

From here we went further North East, towards Nuku Hiva, which is the largest island and also the administrative center, where we again filled our food and diesel supplies on route to The Tuamotus, after nearly a month on these rather deserted island. That said, in most villages you can buy meat, beer, flour, water, ice cream and other basic supplies. In generel, we have found that these days you find a nice selection of many items, if there is a small village. It seems that much has happened in this respect, during the last years. 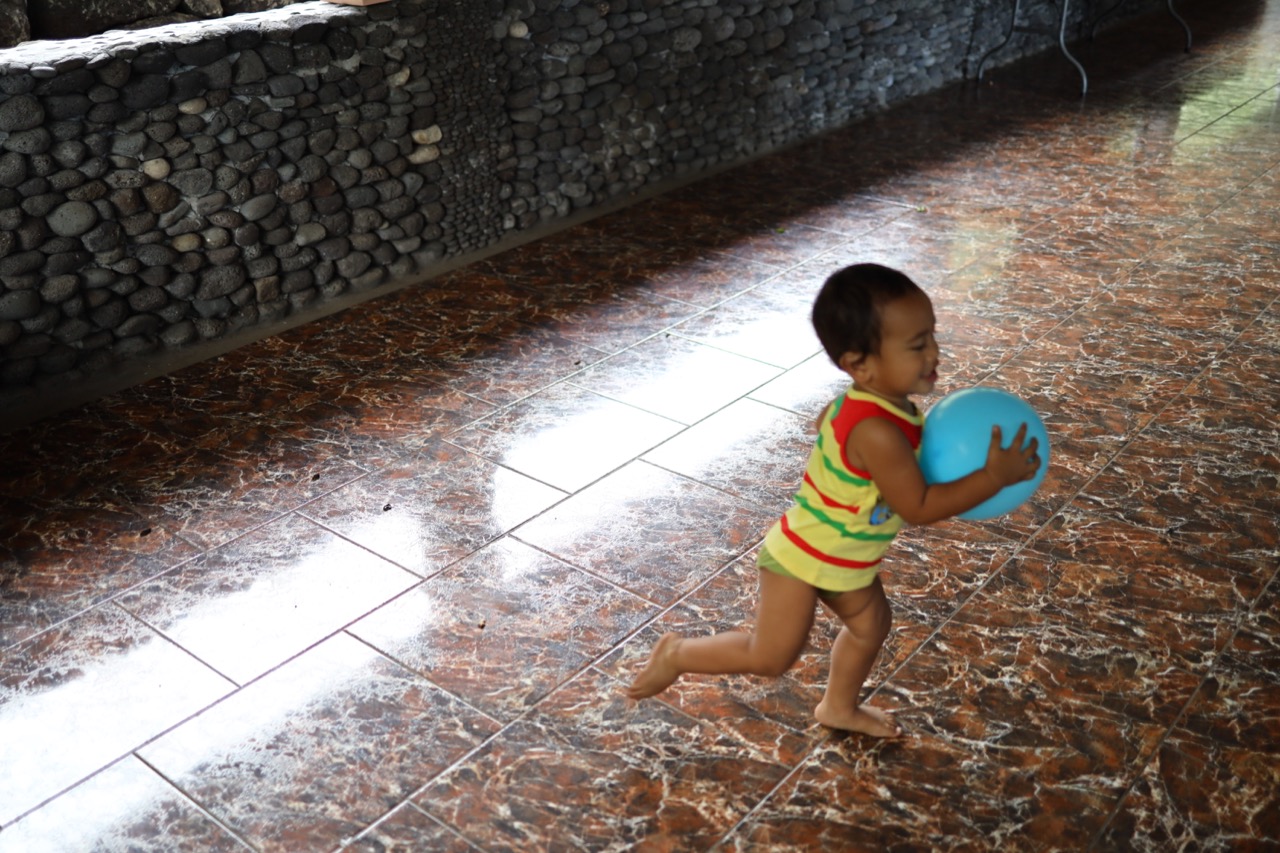 Nuku Hiva was a highlight in many ways. But the best two experiences were an island tour with a guide named Richard, who is famous in Denmark for touring with Havanna, and the walk in Daniels Bay up to the waterfall. Daniel, who lived there for many years is no longer with us, but his friendliness and hospitality has been taken over by the village and we had some of nicest food and met friendly faces wherever we went.

We bought lots of fruits and few vegetables. The fruits are everywhere, but vegetables are hard to find. We never really miss them, as there is an abundance of alternatives that are equally enjoyable – and we have travelled this way to meet other customs and live differently to what we do at home. That said, we still have a few cans with liver pate (leverpostej) and Marie bakes traditional danish rye bread (rugbrød) once in a while and those days are really something special!

It was now time to leave when the forecast is good and new adventures are ahead, and our daughters are awaiting us in the Tuamotus. So early morning we were on our way with a 537 nm route set to Fakarava. We expected a 3 day journey with 15-20 knots, but it all turned out very differently. 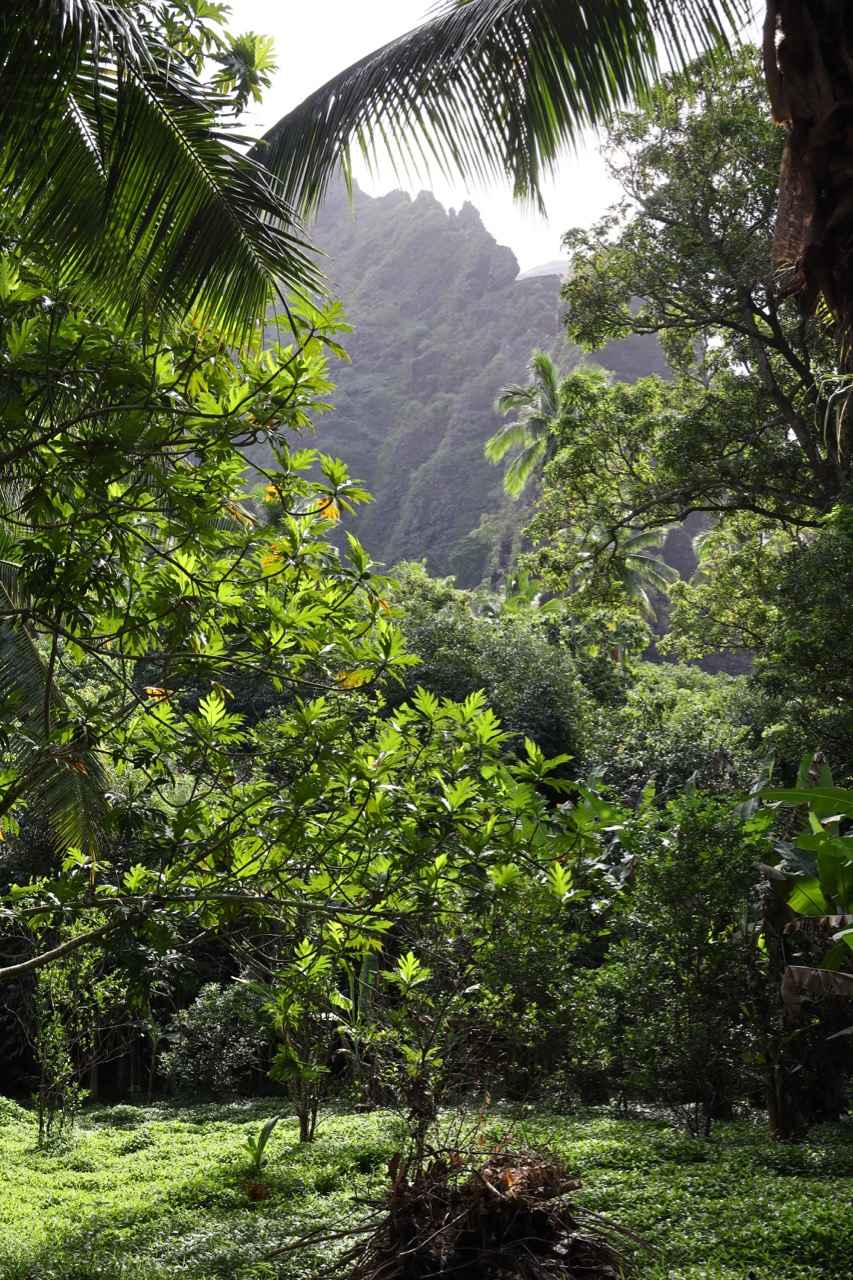 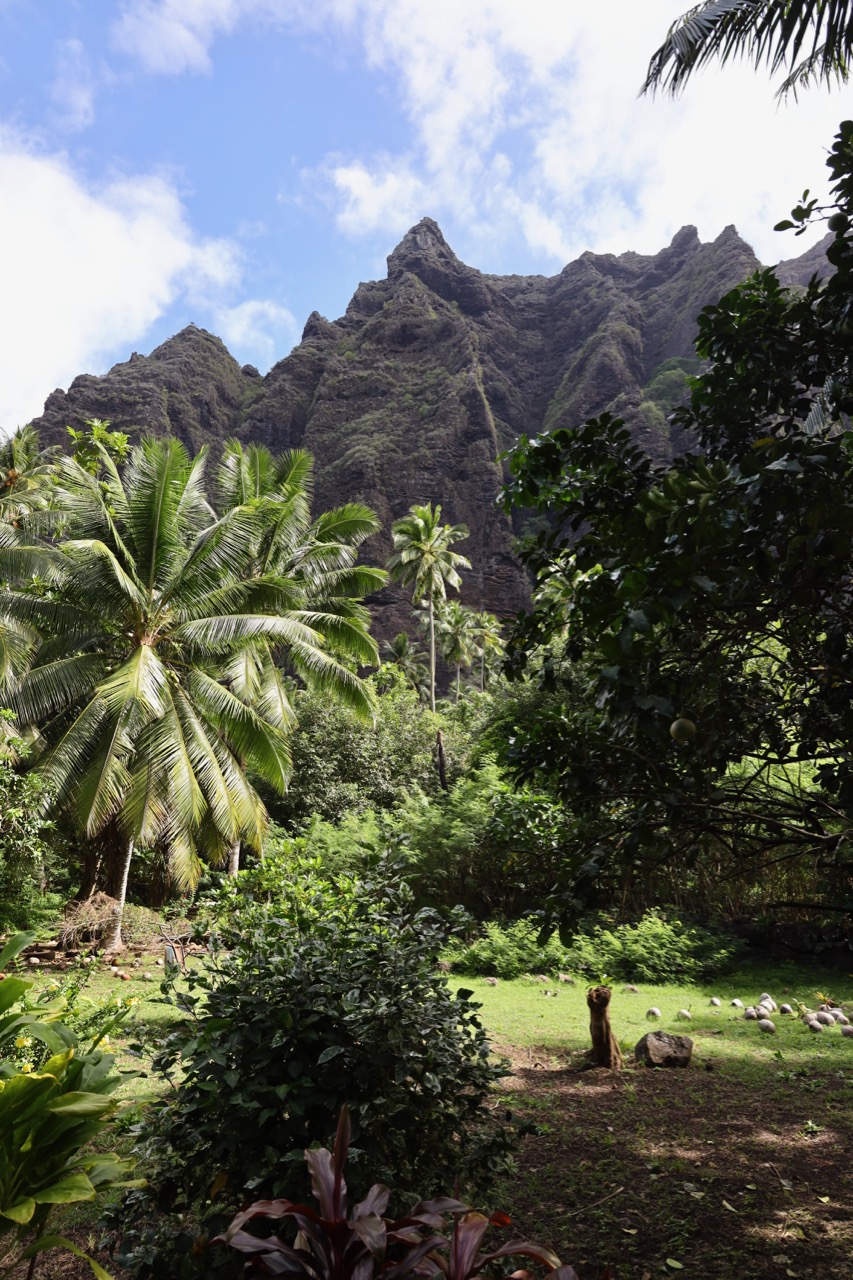 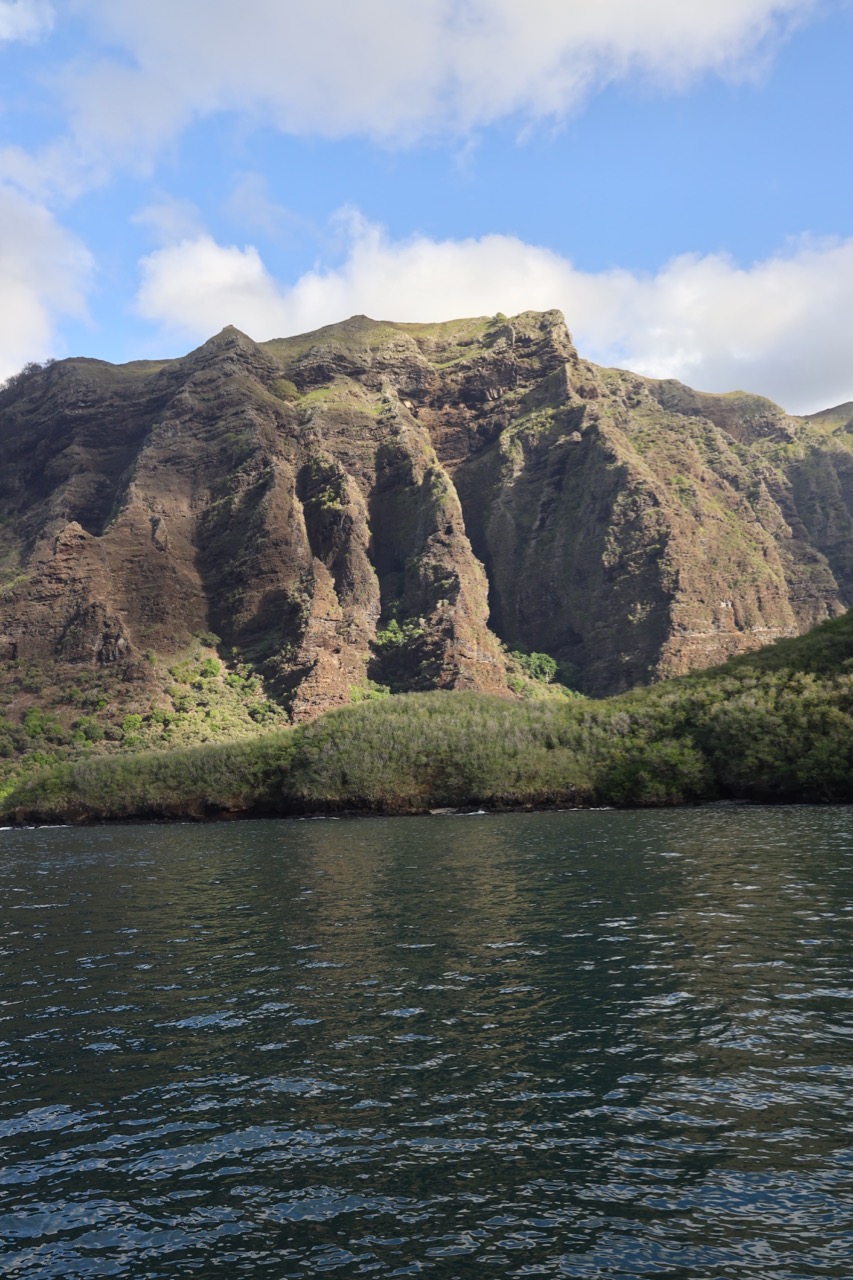