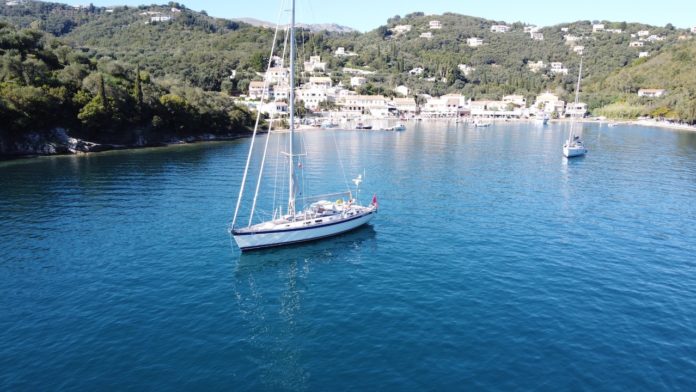 We returned home in November 2019, happy and proud. We had finally crossed the Pacific and arrived into Whangarei in New Zealand. North Star was safely put on the hard and prepared for a short three months vacation and refit, as we were going back March 2, 2020. But so much for a cruisers planning – never has it been more accurate that sailing plans, are written in the sand.

We have enjoyed being home and spending lots of time with our daughters, family and friends and then suddenly it was time to leave again. London was great, the weather was ok but in late February the world had started to mutate, in so many ways. The signs were all over the place, but as many other people, we lived in denial. We believed that China was so far away.  But on February 25th we decided to rebook our fight on March 2 th. It was mostly because it was via Hong Kong and only in mid March, when New Zealand closed borders, the reality of our situation and the world pandemic, started to sink in!

Our circumnavigation had come to a rather abrupt stop, like sailing into a reef with seven knots as we were unable to return to North Star. We also realised during the next months, how fortunate we were.  North Star was on the hard and well taken care of and Marie and I were home together with our family. We were struck by luck, even though it did not quit feel like that!

Many many other cruisers have been stranded in places you really not want to strand, many have been separated from their boats, which were  left hanging on an anchor or sitting lonely in a marina. So many stories have been shared during the last 8 months and our thoughts go out to all our sailing friends, in far away places. Many are now forced to give up their dream, because of the  pandemic.

As you, we have speculated about the duration of the pandemic. We have read papers on the vaccine development, listen to the premier of New Zealand, Mr. Gates and Mr. Trump and many others and our conclusion is that it is not going to be over anytime soon?? Especially not in the more exotic areas of the world, where we were heading with North Star. So what to do?

Life is full of choices, but for us giving up on our dream was not even on the list, so we wanted to continue our adventures – if not in the South Pacific, then where? We always thought we would finish our journey with a few years sailing in the Mediterranean, especially in Greece where we both have special ties. There were two considerations, we had to decide on. Could we safely sail for the pandemic and what about boat. It is possible and safe in Greece at the time of writing this, and you can move around freely as long as you stay in the country. Going to Italy or Spain or even Malta, have its share of difficulties, which I will happily entertain you with in another blog. But Greece was a good option a few months ago and it still is a great option, looking at the rather red and orange corona map over Europe.

Next decision was boat – and frankly that was much more difficult. We soon realised that in order to continue sailing we would have to sell North Star and find another boat. Just having the thought felt like betrayal, being unfaithful – our trusted family member, which have carried us 30.000 Nautical miles across oceans in a very safe and orderly manner. We know her inside out, we have polished her, repaired every piece of her, so it was a very emotional and difficult decision – but it had to be taken. She is in Auckland, New Zealand and we are in Europe, with no means of getting to her. So she is now for sale. We have now applied three times for entering New Zealand and every time received a polite no way. It seems that foreigner with a not so worthy purpose like sailing, are not welcome for the time being. And they are not expecting to open before in the beginning of 2022.

As you probably have guessed, this long rambling story builds towards a conclusion! The conclusion is that we have now acquired another “North Star of Copenhagen”, which we took possession of on October 12 in the Gouvia Marina on Corfu. We will continue our journey and we will hopefully never again be involuntarily separated from our boat.

The new North Star of Copenhagen is a nearly twin to North Star in Auckland. She is a Hallberg Rassy, Swedish of course, Marie would say. She is a 54, so one size up from our 48 and she is from 2012, and has seen very light use. ( More details in the next blog, for the interested. )

We have now been onboard for a couple of weeks and, it feels wonderful and we are glad to be out here again! We are busy checking, maintaining and doing some fixing and hopefully next week, we will stray further out and about Corfu and the Ionian Sea. Before we return home for Christmas, we will leave her in Gouvia Marina again, until we return in the early spring.

That was the plan, and the pandemic has just changed that a few days ago. Europe is again closing down and we believe that the safe plan is to return North, this time around it could turn into a really long winter. So we deploy our bad weather strategy – RUN and HIDE.

The Tuamotus and onwards to Tahiti