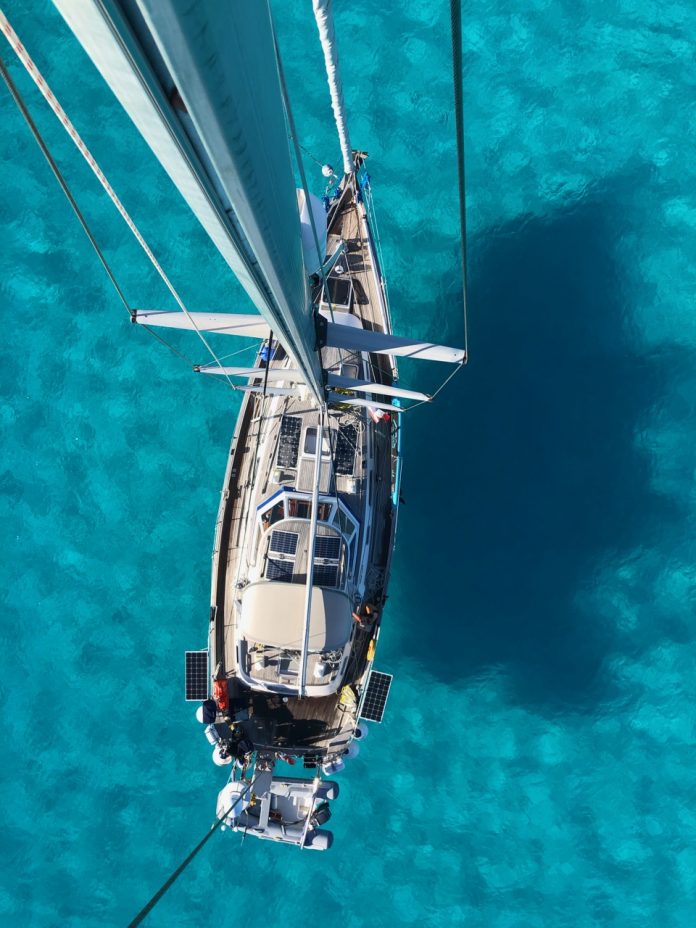 We were not prepared for the Marquesas! We spent a month in absolute stunning beauty and could have stayed for another month, but all good things come to and end. So on a mid morning we decided to leave in very light winds, which only became lighter – so our sails were banging all the way or the engine was running, but we got to Fakarava and went through the pass right on slack time. The El Nino have been haunting us somewhat, being weak but not neutral, and for the moment going back to neutral. We hope the trade winds will return!

The Tuamotus atolls are the oldest group of volcanic remains in French Polynesia. They are not high and green as the Marquesas or the Societies, but flat Motus (sand or coral island) with palm trees. They look very most like what most of us imagine paradise should look like. The people are friendly, and they are spread over 72 atolls far between, and you can always find the next most beautiful anchorage you have ever seen. Some people spend years here and we had decided a month was good

The atoll’s are difficult to see on a distance, they are surrounded by a ring reef with openings through (passes) and you can only go through these in fair weather and at the right tidal conditions. The charting out here is off with several miles, which means that you navigate with your eyes, with radar and with google satellite pictures. That means that in the beginning it is a little scary, because there are reefs all over and lots of coral heads which comes up right off the bottom. There are no repair facilities or spareparts to get, as this is as far away and as deserted as it comes in the Pacific Ocean. In short – a fantastic experience which plays right into the adventures hearts of Marie and I.

We got through our first time pass and headed directly for Fakarava N, which is where a small village is located, we looked for a nice sandy strip of bottom to anchor between the coral heads and found it on 22 meters depth. Out here you need to be carefully that your anchor chain does not wrap it self around the coral heads, as 22 meter is a bit to deep for free diving!

Anyway, we were so exited to finally be at Fakarava, a place I have been reading about in Troels Kløvedal books and from other adventures people, which visited way before us. Only sailors and very few tourists visit here and either way it is a rather large effort to get here. We had to sail 14000 nm to arrive here, which now does not seem very long, but when I reflect on everything we have seen on our way, yes it is far away from Denmark, where we initiated our journey.

We were very kindly received by Fakarava Yacht service, a local french couple which have dedicated their life to help sailors on Fakarava with everything. Call them on channel 12 or 16 and they will be able to help you with wifi, washing, advice or even how to ship stuff – first to Tahiti and then to Fakarava.

We also found a couple of smal restaurants and a number of food trucks and three well assorted supermarkets. Just as a remark, much has happened during the last years, as we have been able to do most of our food shopping in all islands we have visited. Not only Coca Cola and Heineken but also milk, eggs, flour, meats etc.

We enjoyed our time here and met a great boat crew from Halcyon a 41 years old Valiant 40, which later turned out to be a very important meeting for us.

We were not in Fakarava to see the town, so we only spend 2 days enjoying the best hamburgers we have eating in a while and we found great internet and got help with a couple of repairs and then we were ready to leave. Our hand was also forced by weather coming in from SE as it usual does in this areas, when a big high ( More then 1030 ) travels across along 40 degrees longitude. Fakarava N does not have any protection from SE, so we were going south down to the reef and some wave protection.

We were also heading down there because the south pass on Fakarava is world famous for the experience of diving with hundreds of sharks, which lives in the pass and feed and the amazing number of fish, in the reef.

We had to use the engine to get down there, as we were crusing in a marked channel, with the occasional coral head getting in the way. So slowly we made progress and Laura and Emil were keeping us out of harms way, by being on a lookout up in the bow of North Star.

Just when we arrived the engine became really loud and scrambled so we immediately stopped. We managed to anchor and then Emil and I went to work, to figure out what was wrong. We had many theories, but we never really nailed it down, until next morning when the crew from Halcyon came on board to help.

This is a great example of how friendships are formed and relationships which at home would take years to create are formed in a day or two among blue water cruisers.
John, a long time cruiser and self-taught engine guy, who also is a professional photograf in a different life came together with Simon. Simon is danish, and Machine engineer and on a sabbatical – and they offered there help.

They found out that the 24 volt alternator, which is bolted on the main engine was broken of and was really only sitting in the last broken piece of four bolts- so everything was banging, when the engine was running. This is something I could not have managed, but they went to work and jury rigged a repair, with new bolts and horse clams, so at least we had good chance to be able to make it to Tahiti. During the day when the repair was taking place, several other boats were involved. We called on the radio for specific sizes of bolts or other spareparts and every time, cruisers we had never met before offered there help, with no expectations other than we would do the same if we were asked for help. A very difficult situation, where we were stranded behind the reefs, with no engine to get out, was changed to now we could at least take us out.

When the repairs were over, I sent a sat email to KKE motorer in Copenhagen, who is owned by Dennis, my very dedicated mechanic at home. And in just four days, he managed to get the sparepart for the engine from Volvo, get it to our daughter who flew out to meets us for here vacation. She had to divert, so she met us in Fakarava, but 10 days after the accident she arrived with the RIGHT sparepart. 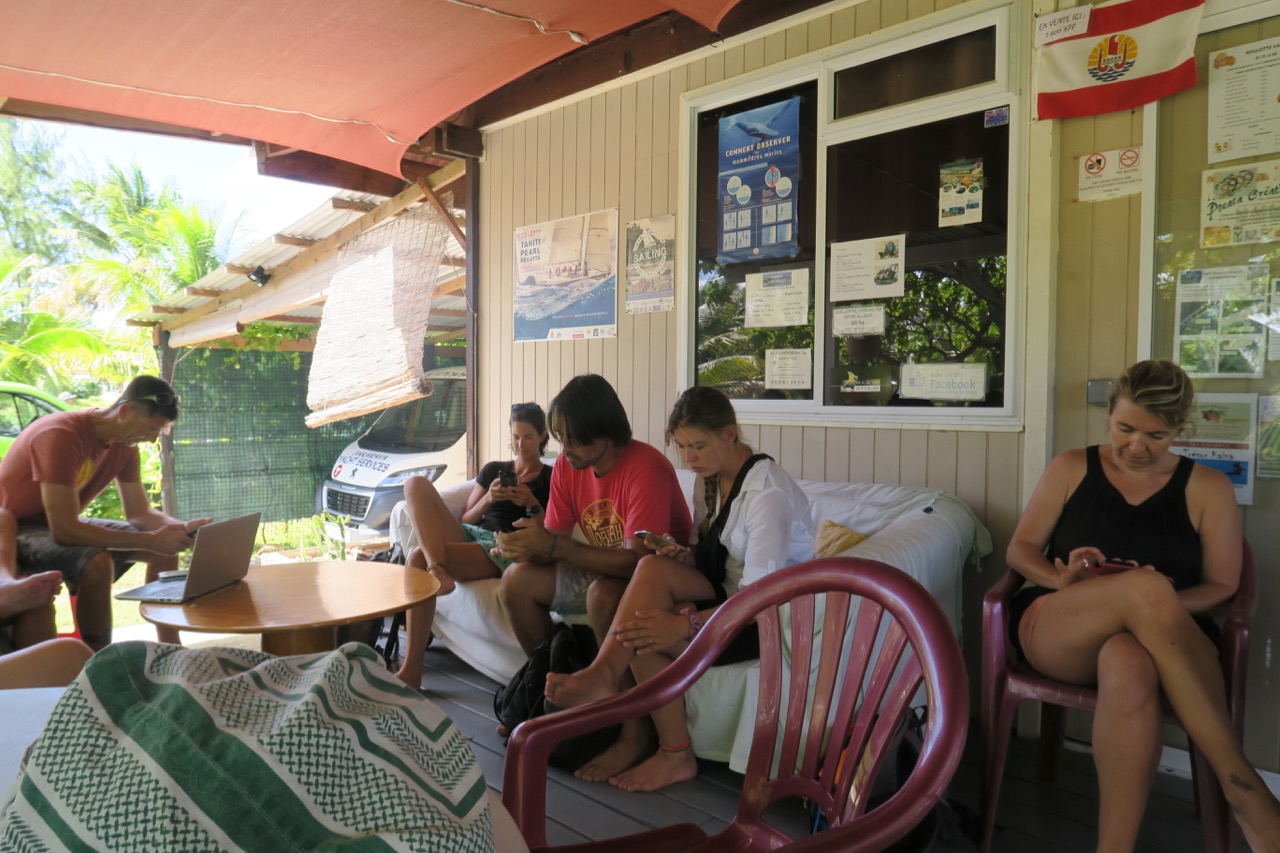 John and Simon diverted from their plans and sailed back to meet us and spend another day to take apart the engine and install the sparepart, so now we are as good as new.

THANKS to all of you, for going out of your way, to help and showing this true cruisers spirit. Maria and I will never forget.

But someone found time to shop for the famous Tahiti pearls on Fakarava. 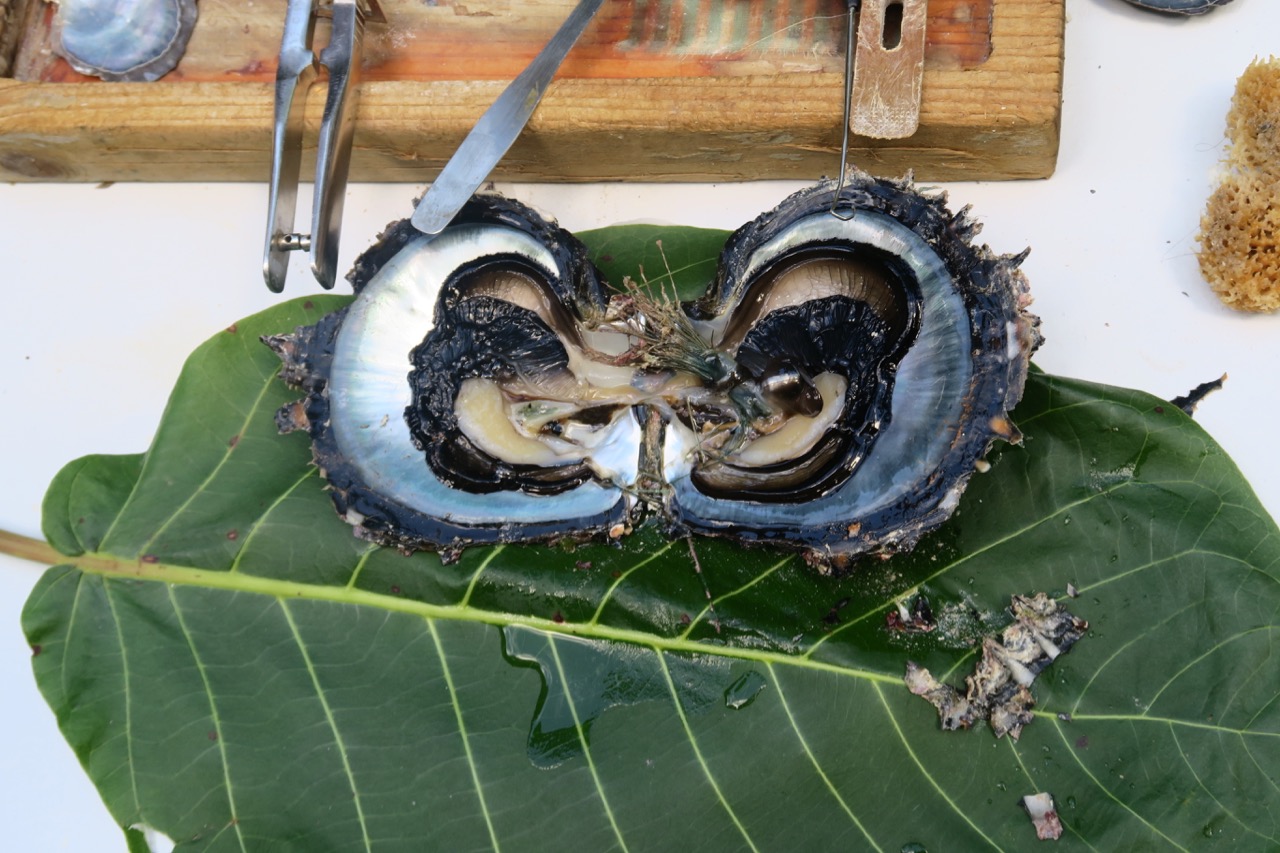 We ended up spending a little short of three weeks in Fakarava South and enjoyed the reef on six dives, seeing more sharks than ever before. This is truly the most spectacular dive ever in my life. You dive down on the ocean side, right at the edge of the fall of to 4 km and here you observe the ocean going sharks, including a single Tiger shark – the locals call this the shark wall.

Then you drift dive through the pass with a 2-4 knots current and observe and enjoy. At first the amount of sharks is a bit scary and later they become part of the scenery. Look at the pictures and enjoy.

There is nothing down here, but together with the diving there are great snorkling, kite surfing with Adrain who lives abroad his boat and runs his kite school. And Lisa who lives here occasional and arrange a typical Polonesia style dinner on the beach. Yes, we had a great time and can thoroughly recommend this. Just look at the pictures. 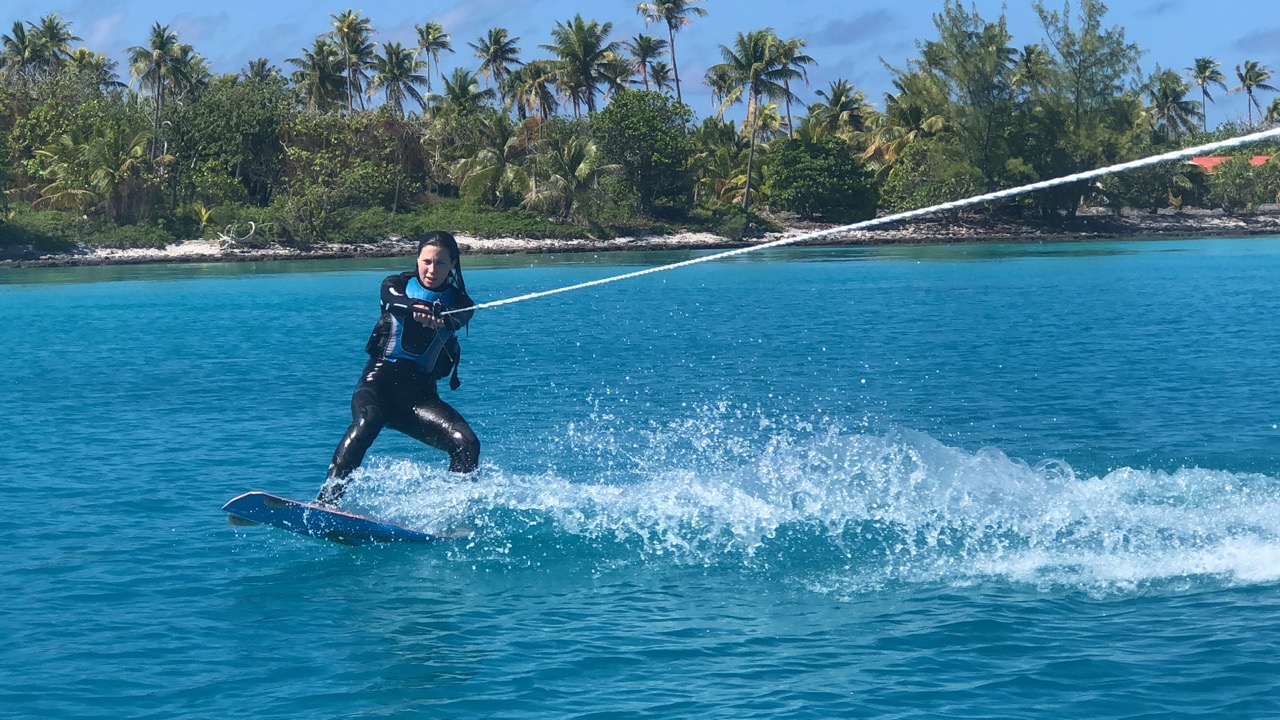 Our timing was now way off as our month in Tuamotus were coming towards an end, so we had to choose and the choice was easy. We went up to Toua, in the fake lagoon pass on the North side. Here we spend time snorkling, having dinner at shore with Valentine and Gaston, the friendly inhabitants of this small motu. We swam in crystal clear water just enjoyed nature. 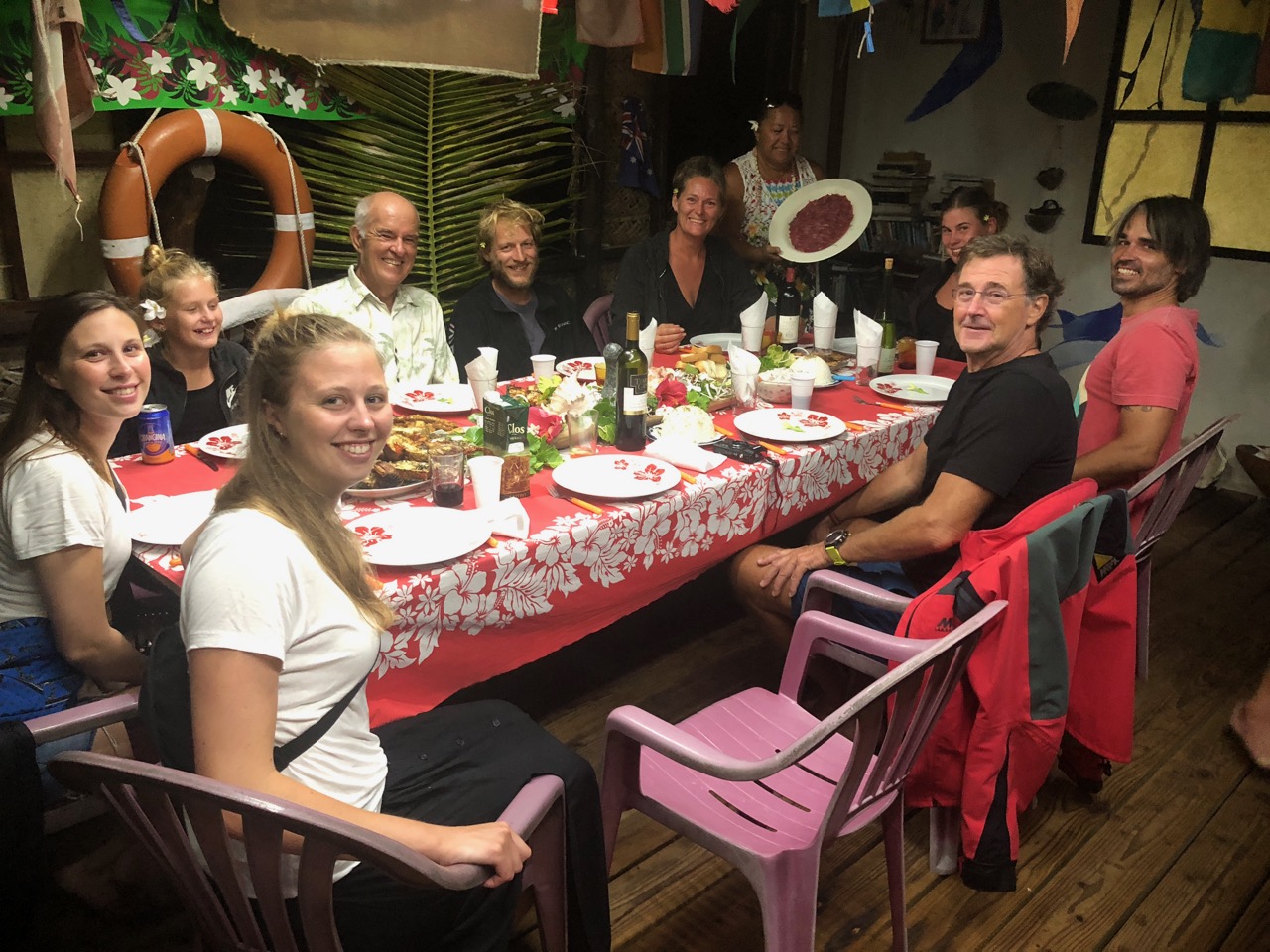 This became our last stop in Tuamotus, before we heading towards Tahiti, and for Marie this became one of the top ten highlight since we casted off.

Since we left, we have debated to stay here in FP for another year, go back to the Tuamotus, visit the Gambier and see it all. But we have decided that so many exciting adventures awaiting in Vanuatu, New Zealand, Caledonia and many others. The decision is to set sails for New Zealand and hide there for the hurricane season, via Suwarrow and Tonga.